Meet the Double-striped Thick-knee, a wading bird native to South and Central America. During the day it is very difficult to spot them, as they have striped, patterned plumage that allows them to blend in will with tall grasses.

Night time however, is a slightly different story. They are nocturnal creatures, and make very loud vocalizations. So even though you may not seen them in the dark, you'll probably hear them!

Double-striped Thick-knees feed on insects, worms, and small reptiles and rodents. They are generally monogamous birds, and each pair will raise 2 precocial chicks each breeding season.

At present, the Double-striped Thick-knee has a large enough range and population size to be listed as Least Concern. The population is currently on a stable trend, and there may be as many as 5,000,000 birds out there!
IUCN Status : Least Concern
Location : South America
Size : Body Length up to 20in (50cm)

The Northern Snakehead is a fish that is originally found in China, Russia, North Korea, and South Korea. However, in the past decade or so they have also made their way over to the United States and Canada, where they are considered to be an invasive
species.

You can identify a Northern Snakehead by its large mouth, very long dorsal fin, and a rounded tail fin. They come in shades of brown, with both lighter and darker blotches.

Northern Snakeheads are excellent hunters, with no natural predators of their own. Which is why their introduction to non-native areas has been so damaging. They disrupt the normal food chain and threaten the livelihood of other species. In North America, the fish have been both intentionally and unintentionally introduced, and have been found from Florida all the way to British Columbia.

One reason they are so hard to contain is the fact that they can breathe air, and can survive out of water for long stretches of time. This means that they have the ability to move between nearby bodies of water by wiggling their bodies.
IUCN Status : Not Listed
Location : East Asia
Size : Length up to 40in (1m)

The Purple Frog is an incredibly fascinating amphibian-- not only are they one of the most recent frogs to be discovered by science, but they are also members of a family that has lasted for over 130 million years!

You'll find the Purple Frogs in a very small range in southern India. But amazingly, their closest relatives live over 1,500 miles away in the Seychelles. Once upon a time the common ancestor of the Purple Frog and their Seychelles cousins lived on a landmass that split away from Gondwana, the southern supercontinent. As the landmass continued to drift, pieces gradually (over millions of years) broke off, and the Seychelles and India became separated. That is why today the only members of the Sooglossidae family live so far apart!

Now, it's not wonder that it took until 2003 for the Purple Frog to be discovered. They are small, maxing out at around 7cm, and they live almost entirely underground. They sometimes dig tunnels as deep as 10ft below the surface! The Purple Frogs only emerge for a few weeks each year in order to mate. Unsurprisingly, they feed on termites and other subterranean insects.

Sadly, the Purple Frog is considered Endangered. They have a very small range that is threatened by agriculture and deforestation. There are protected areas nearby, but so far they have not been observed inside of them.
IUCN Status : Endangered
Location : India
Size : Body Length up to 2.5in (7cm)

Unsurprisingly, the Greater Kestrel is one of the largest Kestrel Species (though they are still small overall when compared to other birds of prey.) These members of the Falcon family measure jsut over 1ft in length, and have a wingspan of around 2.5ft.

Greater Kestrels have a range that extends across Southern and Eastern Africa. They inhabit open tracts of land, including savanna and semi-desert locations. These birds share their range with other Kestrel species, but can be identified by their larger size, white eyes, pale reddish coloring, and the dark bars that extend down their wings and tail. Males and females have identical plumage.

When it comes to hunting, the Great Kestrels wait on high perches, using their sharp eyes to locate prey in the brush below. They most commonly hunt ground-dwelling animals like lizards, insects, and rodents, but they will also occasionally catch birds in flight.

Speaking of flight, the male Kestrels put one some pretty spectacular aerial shows when it comes time to snag a mate. They dive, roll, and hover in place in hopes to attract a lady. Showing off their silvery under-wings is quite the turn on!

After breeding the eggs (up to 7 of them!) will be laid in an old nest built by another bird species. Why build your own when there are perfectly good nests just sitting around? The female does all of the incubating, and the chicks will stay with their parents for about 2 months.
IUCN Status : Least Concern
Location : Southern and Eastern Africa
Size : Body Length up to 14.5in (37cm), Wingspan up to 33in (84cm)

Welcome back everyone! I hope you're ready and set to learn about all kinds of cool animals again!

Today's creature is the American Black Bear, the smallest of the North American Bear species. These mammals can be found all over the continent in forested areas, and there are actually 16 recognized subspecies that range from Alaska to central Mexico.

One odd tidbit about these Bears is that they are not closely related to the other North American Bears (the Brown and Polar). In fact, their closest relatives are the Asian Black Bears and Sun Bears. This relationship is easy to see when you consider that about a quarter of all American Black Bears have white chest spots-- those same spots are common in their Asian relatives!

Another cool fact? American Black Bears aren't always black! They can be brown, blonde, grey, and even a creamy-white color! The eastern bears tend to be darker in color, while those in the west are more pale.

Interestingly, animal matter makes up very little of the Black Bear's diet. They eat mostly fruits and grasses, but will pick up the occasional insect or forage from the remains of another animal's kill. They do not actively hunt out vertebrates.

American Black Bears tend to be solitary, and they can be either nocturnal or diurnal, depending on where they live. The sexes tend to only up when it comes time to breed, and females will have their first litter between the ages of 3 and 5. After that, she'll have a new set of cubs every other year. In colder areas, the Black Bears will hibernate in winter, and the cubs are usually born during that hibernation period.

In general, the American Black Bear is listed as being of Least Concern. However, some subspecies are threatened (like the Louisiana and Florida Black Bears).
IUCN Status : Least Concern
Location : North America
Size : Shoulder height up to 3ft (.9m), Weight up to 500lbs (227kg) 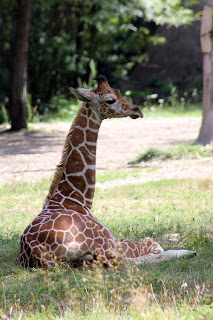 Life ended up being a little bit nuttier than anticipated, so new posts have been pushed back a tad. But don't worry-- it's only a week!

Starting Monday, August 26th, Animal A Day will be back with new creatures on a M-F schedule.

As always, thanks for reading and we'll see you soon!
Share |
Posted by Lauren at 8:09 AM 1 comments
Labels: Announcement