For anyone who was counting, yesterday was our birthday-- four years! Four years filled with animals from A to Z, more than 1,100 of them! I can't thank my readers enough, it's been wonderful!

And in celebration of that milestone... I'm taking a break. Hopefully not forever, but for a little bit at least. In the mean time I plan on getting a new layout out, along with some updates to some of the older articles.

I'll post updates here and on the Facebook page, I'm also brainstorming some new animal-related projects, so keep an eye out!

Thanks again for four awesome years! 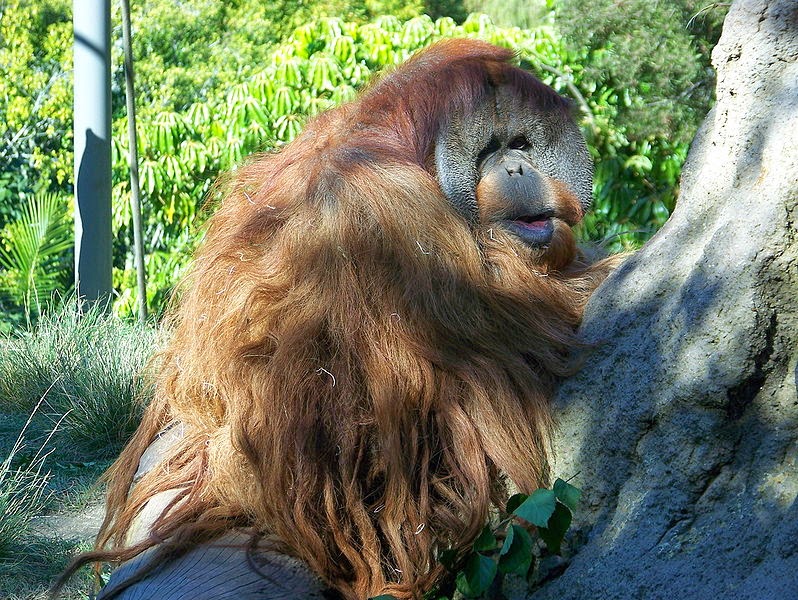 Bornean Orangutans are largely solitary. A handful might live within a small range but they will seldom interact with one another. Males and females only meet up to breed, which happens only once every several years. A young Orangutan will stay with it's mother for about five years, and the females tend to go about eight years between births. That is the longest interim period of any animal!

Sadly, the Bornean Orangutans are in a lot of trouble. They need large forests in order to thrive, and deforestation and habitat degradation has left many homeless. They are also hunted for meat and for traditional medicines. Conservation areas are being established to help these guys in the wild, and it is believed that there are around 50,000 left in the wild.
IUCN Status : Endangered
Location : Indonesia
Size : Weight up to 165lbs (75kg) for males, 85lbs (38kg) for females

It doesn't require a huge imagination to figure out where the name "Star Tortoise" comes from. These reptiles have carapaces that are predominantly dark with a lighter, starburst-type pattern.

You'll find these fancy Turtles in the drier regions of India, including scrub forests, semi-deserts, and arid grasslands. They are most active during the early morning and late afternoon hours, when they spend time foraging for flowers, grasses, and leaves.

During mating season, which coincides with the rainy season, males will fight one another for mates. During these matches they will shove back and forth and attempt to flip their rival over on to his back. The last one literally standing wins. After mating, the females will dig a hole and lay her eggs-- each season she can produce up to 10 clutches of up to a dozen eggs each. Those eggs can take anywhere from 1.5 to 6 months to hatch (depends on the weather conditions) and the young Tortoises are totally on their own from the start.
IUCN Status : Least Concern
Location : India
Size : Length around 10in (25cm)

Le Conte's Thrasher is a bird named for John Lawrence Le Conte, an American entomologist. Though he was a renowed Beetle expert, he discovered this particular bird while on a Beetle-finding trip to Arizona. Le Conte ended up collecting many different birds on his Beetle trips, sending them back to the Smithsonian.

But lets learn more about this bird! The Le Conte's Thrasher is a very pale colored bird found in northern Mexico and the southwestern United States. It lives in very dry, desert areas that have little vegetation. They live in some of the most desolate parts of North America!

Their habitat is so dry that standing water is only present for a few days a year. Luckily these birds are able to get all the water they need from the insects that they eat. Invertebrates are their main prey, but they will eat fruits and seeds as well when they can find them.

These birds are currently listed as being of Least Concern, though they have become rare in some parts of their range. They need a Desert environment to survive, so areas in their former range that have been irrigated and developed are no longer suitable for them.
IUCN Status : Least Concern
Location : North America
Size : Length around 11in (28cm)

Meet the largest Scorpion in North America-- the Hairy Scorpion. These arachnids can grow over 5in long, and their large size makes them quite the predator within their desert habitat. They feed on smaller invertebrates (including other Scorpions) and will even hunt snakes, lizards, and small vertebrates as well.

Hairy Scorpions are named for the dark brown hairs that cover the backs of their otherwise yellow-ish bodies. Their coloration helps them to blend in with the dry environment that they live in. You'll find these Scorpions in the Mojave and Sonora Deserts.

The large pincers on these arachnids are used for more than just grasping at food. These guys are excellent burrowers, and can dig tunnels that are more than 2m in length. They hang out in them during the daytime, emerging at night to hunt.

Even though they are large in size, the Hairy Scorpions shouldn't frighten you. Their sting is venomous, but tends to be no worse than a beesting for the average person.
IUCN Status : Not Listed
Location : North America
Size : Length around 5.5in (14cm)

Today's animal is the Brown Hyena, the rarest of the different Hyena species. These interesting carnivores live only in southern Africa, and they make dry desert and semi-desert areas their home.

Brown Hyenas live in small social groups that are led by an alpha pair, very similar to wolves. These packs have a specific hierarchy that is enforced through aggressive and submissive displays. Typically only the dominant female will breed, though not always with the dominant male!

Scavenging is the name of the game with the Brown Hyenas. Their packs will consume animals killed by other predators, and sometimes they will even drive that exact predator off in order to get to the meal. They aren't very good at hunting their own food though, and because they never know when a carcass will be available they often hide extra food to come back to later.

Brown Hyenas are considered Vulnerable because they tend to come within close range of human settlements. Their aggressive behavior causes problems, and many residents attempt to poison or shoot them. They do live within a few protected areas, but they continue to be killed outside of those borders.
IUCN Status : Vulnerable
Location : Southern Africa
Size : Shoulder height around 30in (76cm), Weight up to 120lbs (54kg)

Despite its name, the Austrlian Pelican is found in more places than Australia. Fiji, New Guinea, and Indonesia are also countires that this bird calls home. Some have even made their way over to New Zealand!

These birds prefer habitats that have a lot of open water. Lakes, reservoirs, lagoons, and rivers are just some of the different bodies of water the Pelicans will live near. But really, any body of water that has enough food to sustain them will do.

Australian Pelicans are large birds, but are medium-size when compared to only other Pelicans. Tehy do, however, have the largest bill in the world-- the longest recorded was 20in long!

The Pelicans use those bills in order collect and store prey. They hunt together, working in groups to drive small fish and aquatic animals to shallower areas. Once that is accomplished they use their bills to snatch up prey. Fish is their primary food source-- but they have been observed killing other waterbirds to. Because they lack sharp claws or a tearing beak, they have to kill them by drowning them.
IUCN Status : Least Concern
Location : Australia
Size : Wingspan up to 8.5ft (2.6m)