I made my first trip over to the Brookfield Zoo yesterday, and had at the great fortune to stumble upon several species that I'd never seen in person before.

...Unfortunately it was about 85 degrees out, which was unseasonably warm for Chicago, so most of the animals were pretty lethargic, but it was a fun time nonetheless.

Some pictures and highlights below the cut 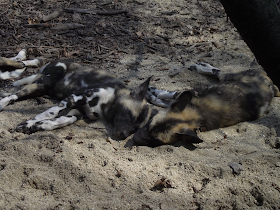 African Wild Dogs
They had ten adorable puppies born last Thanksgiving. Once grown, these rare hunting dogs will be sent off to other institutions where their genes can best serve the Species Survival Plan

Wombats
Apparently Wombats look like they are dead while they are sleeping. They were in this exact position when I checked back on them 4 hours later. No wonder the zoo has to put up signs assuring visitors that they are, in fact, sleeping. 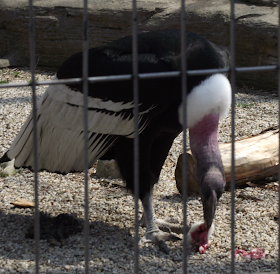 Andean Condor
This particular bird was one of the most entertaining stops on my visit. It apparently is quite fond of mouse tails, as it kept hopping from mouse corpse to mouse corpse, ripping off the tail and occasionally diving into some innards. 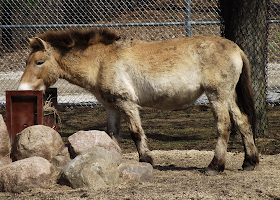 Przewalski's Horse
I've been fascinated by these horses for as long as I can remember. They are the last remaining true wild horses on the planet, and were extinct in the wild until very recent reintroductions efforts returned herds to protected areas.
Lauren at 1:23 PM
Share