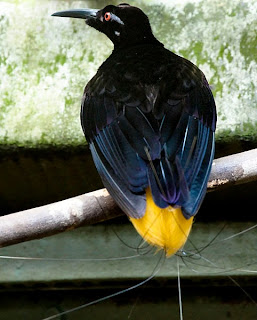 Male members of the Bird-of-paradise family are known for having strange plumage and delightful courtship displays. Today's bird is no exception.

Found in New Guinea and Indonesia, the Twelve-wired Bird-of-paradise is a sexually dimorphic species where the female is a reddish brown with dark bars, and where the male possesses some goofy feathers in which to attract a mate.

Males have dark feathers on the back and chest, complete with green tips. Their tail plumage is bright yellow and fluffy, and has a dozen thin, wire-like feathers that curl outward from it (giving the species its common name).

When the breeding season rolls around, the male wants to attract as many ladies as possible. He finds a perch, and from there will poke at prospective mates. He'll show them his bright feathers, and will hop from foot to foot while swiping the females with his wire-feathers. If the female is impressed, they mate, and she goes off to build her nest and incubate her chicks alone. Breeding season can last half a year or longer, depending on the location, so the males have a lot of dancing to do!
IUCN Status : Least Concern
Location : New Guinea, Indonesia
Size : Body Length up to 13in (33cm)
Classification : Phylum : Chordata -- Class : Aves -- Order : Passeriformes
Family : Paradisaeidae -- Genus : Seleucidis -- Species : S. melanoleucus
Image : Peter Tan
Lauren at 1:00 PM
Share